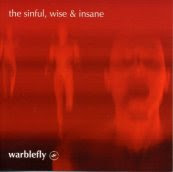 w a r b l e f l y started out in 1995 as a group of friends got together to drink and play folk tunes. Unhindered by skill but full of energy they soon progressed from playing in a small college bar to local pubs, folk clubs, art centres and countless private functions until in 1998 they were invited to Cairo, Egypt. Here during a mental week of hugely successful gigs they changed their sound to a faster and punchier style and never looked back. They went on to win the prize by popular vote for Best Act at a major Dutch street music festival, gigged in France and continued to play their usual haunts in England. In 2001 they released the album the sinful, wise and insane and they made increasingly frequent appearances at festivals around England. In 2003 warblefly were invited to play at the Glastonbury Festival and May 2004 saw the release of their new album crashing through the trees. The warblefly repertoire now contained an impressive catalogue of strong originals as well as trad standards that have been given the trademark warblefly treatment. The highlight of 2004 was a support slot for the legendary Shane MacGowan. More festival appearances for bigger crowds than ever before followed in 2005. The next year was spent mostly with refreshing the line-up and the repertoire after the departure of lead singer/bassist Griff but warblefly still managed to squeeze in a few cracking festivals. In December 2006 a new demo was recorded and the band is now once again ready to get up and get the crowds going.

You Can alo find out more at Warblefly’s website; www.warblefly.co.uk/