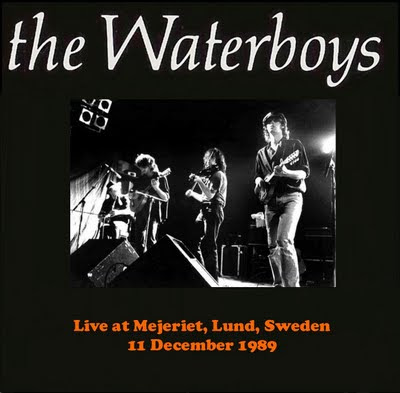 This live set was recorded in Sweden in the Winter of 1989.It was the follow up tour of the Album “Room to Roam”,which has got to be my favourite Waterboys Album.This recording contains the same irish folk material of the album, but has the priceless sound of a live set along with it, to make it a great recording.
The waterboys packed up from their london abode in the late 1980s when they crossed the sea to Ireland, where they lived for a while in county Galway on the west coast.It was here, in Bidean nan Spideal, that the band set up their own recording studio and released their new album “Fishermans Blues”, which next in line from to Room to Roam,is another favourite album of mine.This album shifted in style from The Waterboys Original Rockstar Style of play and embraced the irish-folk culture in which they were now surrounded with.
The next again year the Band released Room to Roam, which Delved even deeper into the rag tag diddley sound that they were now gracing the local pubs and music halls with.
By this time also,the band had grown noticably with the addition of Steve Wickham,Trevor Hutchison, Peter McKinney , Colin Blakey on accordian,Sharon Shannon and Noel Bridgeman as well as the original members Mike Scott and Anthony Thistlewaite.This was probably the best line-up the Waterboys ever had to date, and the band also embraced Inputs from many various local Talented Musicians.One suchlike most noted was a narration from Galway Musician Tomas McKeown on the Bands Musical version of the classic Yeats poem “The Stolen Child”.
It was soon after this that the Band started to split up over Musical differences as Mike Scott and Anthony Thistlewaite wanted to take the band back to the style of their earlier,more Rock Styled years.The rest of the band, most notably Steve Wickham were against this.When he left, the other members followed suit.
This was a great recording, from a time when The Waterboys were at their best.Contains a lot of the material from Fishermans Blues and room to Roam,yet also has a few contemporary outtakes and additions including a crackin Raggle Taggle Version of Dylan’s Girl From the North Country and a Rockadiddley “How Many Songs Till I Get Home”.Well worth a listen to for any waterboys fan or anyone who even likes the band in the smallest way.