This is a hidden gem from the Pegues Early years. One their early live recordings and you can still here the raw Pogues sound of the original band and beer fuelled audience. You really can’t beat the Pogues when it comes down to atmosphere at a Gig. they nail it proper. This Gig took Place at the Working Men’s Club in Newport in Wales, 1984. At this stage the band were still busking it on their way to releasing their debut album “red Roses for me” later that year. So this is probably one of the first Pogues recordings.

Bursting straight in with Traditional sea shanty “Greenland Whale Fisheries”, you can hear the Raw early Pogues sound from the outset. Good old fashioned rat-a-tat-tat drinking music that rears the spirits up for  a session.

The Whisky guzzling anthem “Whiskey your the Devil” is a great version with Marching Band style Drum roll from Andy Ranken.

A few unnecessary bits of narration from Penny Whistle Player and Beer Tray percussionist Spider Stacey, who was always keen to add his contribution in his sore thumb styled London Accent. Perhaps better sticking with his Accordion input, which was amazing, especially in the classic Pegues Love song “Kitty”, to which his contribution on this set was one in a million. With other such Classics like “Dark Streets Of London”, the Legendary “Sally Maclennane” and the Famous Instrumentals like “Dingle Regatta” and “Battle of Brisbane” , with Spider Stacy’s Penny Whistle and the infamous Beer tray off the Head Percussion, this makes a great live set. Great Blood pumpin Whiskey Drinkin Music. Well worth a listen if you’ve not heard it already. 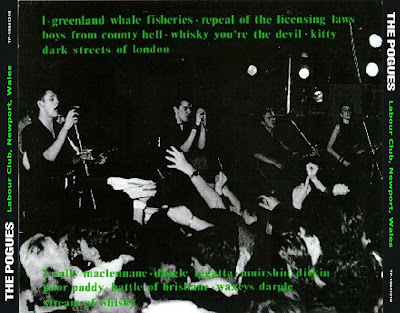