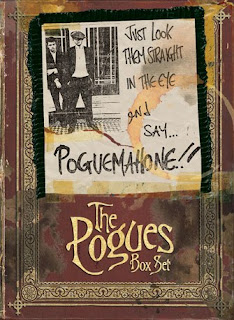 This is a superb collection of rarities and demos from the pogues,peiced together by phil chevron.Here is a selection of recordings from back in 1983 right through to 2003.
In the first disc alone,their is a whole albums worth of stuff that was never released as an album,although initially intended to be.
This takes in a lot of variations of style.From the traditional style covers of ewan maccoll, such as “Hot Ashphalt”,”The Travelling People” and “North Sea Holes”.
It later features material from a later period with contributions from Joe Strummer.
It also features live recordings and various radio sessions.There is a radio freindly version of “Boys from the County Hell”,which i suppose might be handy lyrics to know in the event that you might want to sing it at yer grannys new year do.
The name derives from the irish Gaelic words that translate “Kiss my Arse!”,which ,in case you never knew,was the o name of the band before they had to change it in order to be accepted for a release.
Download