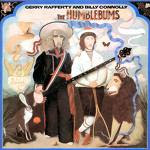 This was the first album with the Glasgow Band Now as a Duo, Billy Connolly and Gerry Rafferty, following the Departure of Tam Harvey.Released in 1970.Contains quite a few good tracks including the classic “Her Father Never Liked Me Anyway” which was covered years later by the legendary Shane Macgowan.Along with the Melancholy signature of Rafferty it also has the Bluegrass sound of Connolly at that time.
Worth a listen.