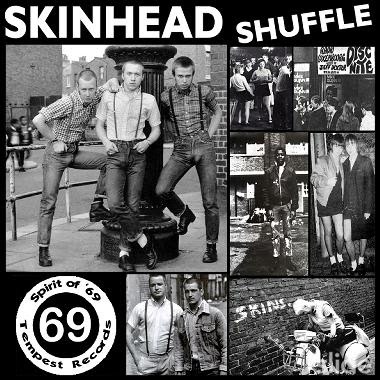 Originally founded in 1979 by Kid Stoker.Red London were a Punk/Oi band from Sunderland in
the North East of England.Although founded in 79, the band didnt really take off until
a breif Demise and Reform they Started up again, this time with Kids older brother Gaz
Stoker (Lead Guitarist with the first Sunderland Punk Band “The Rebels”) on the Bass Guitar
.They were accompanied by Raish Carter on Drums, Steve Smith on guitarand his brother Patty
(of the original 79 lineup) on Vocals.

The original 79 set recorded a Demo, which is now long since Lost.This Demo featured the
original version of the song “Sell Out”, which was later done by yet another Sunderland
Band “Red Alert”, which was Kids other band during the bands Slumber.

Sunderland being a very Working Class Industrial Town in itself, Kid was of a very
Socialist mind, and when the Consevative Party were elected into power in the UK, under
Thatcher in 79′,there was no better time for a voice for the Working Class Struggle.This
was a role that the band,especially Kid, embraced and went at it full throttle.The band
also went on to play several Benefit gigs for the North east miners, during the strikes of
the early 80’s.At that time, the North east of England was one of the political hotseats
of Britain, being as thatcher declared Destruction of these communities,by closing Down
Factories,shipyards and most noted of all, the countrys Coal Mines.The boys certainly had
a commonly shared outlook on society as the crowds they were playing to at that time.
They took a lot of influence from Contemporary Bands like “The Clash” and the more local
“Rebels”.
When they released their First LP “Sten Guns in Sunderland”,Raish had been Jailed a
fortnight previous for a Drunken misdemeanour involving a local drunk and a metal comb
,half arsedley disguised as a knife.Again when their second release, the “This is England”
EP was recorded, Raish had been banged up again, this time for non payment of fines.So
the band then recruited Drummer Max Muir, whom they knew and jammed about with now n then
in the rehearsal studios.Max later left the band in 84,after his girlfreind and him moved
out of the area.
When Patty left for a while in *^, Raish convinced the band he could cut it at vocals.So
there it was,drummer to vocalist.Vocally this wasnt too bad, but it wasnt long before
Raish was back in the Nick yet again.Patty came back again after his marriage plans hadnt
worked out,but had to leave once again after increasing pressure from his new wife, who
wasnt into the band and touring at all.
So next up Marty Clark was drafted in as singer.He sang for almost a decade before retiring
for the quiet life.This was when Steve Smith stepped forward to be Vocalist.

Although Red London made it well in the UK, they found a thriving audience in Europe, where
the music culture there was Dictated Less by the Music Press and Fashions of the times.

Downloads;
“Once upon a Generation”