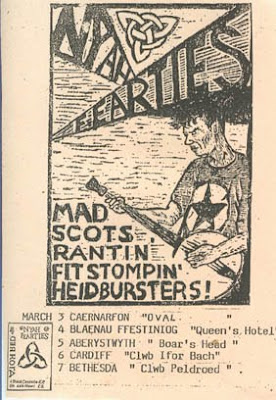 From the sticks of south west Scotland, came this great wee band.If you have been a follower of the Pogues back in the early 80s,then theres a good chance you might have seen Nyah Fearties.
Originally formed 82 , the fearties brought back a pride in Scottish Music , which after many stale years had become yet just another tartanisation, with the same old trad arrs being played year in ,year out.As did the Pogues with the Irish Folk music at that time,The Fearties gave to scottish music that kick in the sound that was long needed with their anarchic , shanty-Punk style of playing.
Consisting mainly of brothers Davey and Stephen Wiseman,of the small Ayrshire village of Lugton, Nyah Fearties played from 1982 right through till their demise in 1995.
Originally founded in 82, the Fearties were Davey on Bass and Craig White on vocals With contribution of Treesy on the Drums, their addition to a compilation tape of conempory bands from Ayrshire, blew the rest of the bands away with the one track.
Soon the band was joined by Lawrence Bryce on Guitar and Alan Cook on Drums.They were now in a position of playing regular gigs , covering a mixture of Punk and Folk Tracks and Firing in their own material into the bargain.
By the time 85 came around, the Fearties were now needing a kick as they were dwindling.Davey then teamed up with old pal Donald Cuthbertson and his younger Brother Stephen on Banjo, and started rehearsing in an old barn that was on Donalds parents farm.
using old trashcans,binlids,gutterpiping and any other old trash they could get a noise from,they created their own style of shanty percussion.Now the Fearties were adapting their own unique sound, influenced by the punk and reggae sounds of the time along with traditional Scottish folk,Rockabilly and country western/bluegrass which the brothers had taken from their uncle,who also was a keen Banjo player.With Stephens contribution to the band, they also created their own crazy looney material,which for its time (and even still today) remains unique.
Stephen ,keen on the banjo , had also done some farting about with creativity and had now invented his own musical instrument, the Ganjo, which self explanatory as the name goes, was made from an old beat up accoustic guitar with banjo strings on it,creating a deeper and fuller accoustic sound to the traditional Banjo.With Donald on Banjo,they played their first superb performance with this arrangement in 1985 at the Kilmarnock Centre , to which they drew an awe inspired crowd.for many at the time,these first gigs the fearties played were a life changing experience.Unfortunately though, this set up was not to last for too long, as it was a hassle and a half , howfing oil drums and scaffolding all over the place every time they gigged.
Davey and Stephen now took to the streets.Busking on the streets of Edinburgh and Glasgow the Wiseman Brothers (now known as the “Feartie” brothers) played for a while as a two peice band and soon moved southwards to london.It was here in the borough of Camden, whilst busking away,they were discovered by the Pogues, who consequently , asked them to play a gig supporting them at hammersmith palais in 86 to which they played and then went on to tour with the band on their tour of France of that year.
soon after this, the Brothers returned the Barns of Lugton to Record their Heidburstin,Fitstompin sound with Donald Cuthbertson once again and released their first album “A Tasty Heidfu’ ” in late 1986.
As well as a one off slot on Radio Scotland called “the Lugton Looney Show”,the Fearties also had a one off National Televsion appearance on the Long running Channel 4 music show “The Tube”,where they broadcast their raw style of sound to a wider audience.this was some performance that impressed many with their shanty heidbangin style of play and their unconventional style of show.unlike most bands that played on that same show (ie. on stage),the Fearties brought their own “Galaday float” style of stage with them in the form of a haulage trailer staged out and draped with tartan and lion rampant.Once again they used old trashcans as percussion and battered the Accoustic Bass,Ganjo , Banjo and Fiddle like hellcats.

Next up,the fearties went on to record the 4 track “The Good the Bad and the Alkies” EP,with just Stephen and Davey again.This was soon soon followed by a single release “Barrassie” and then another LP called “Desperation of a Dying Culture).This was a brilliant album.

Also in 86, the band released their first version of the album “Grandpa craw” on cassette tape.
Davey and Stephen carried on as a two peice Band for a few years.They played to crowds around the Uk at Free festivals and pubs all over, until, in the early 90’s Davey put down his long played accoustic Bass and picked up the Electric guitar.He started working with Bass player Alan Henryon some new material.Stephen came back in again on the Banjo,and the trio then recruited local songwritrer and musician Franny Lopez , later to be replaced with Micheal Woods on the Fiddle,Accordian and Penny Whistle.
the team now started gigging again under the name of “The Collaborators” and done some spectacular live shows in the Uk and Around Europe.They went on to release cassettes “Red Kola EP” and “Keech in a Poke”.In 1994, the French record label “Jivarock” released the “Grandpa Craw” album, which the Fearties later re-released once again in 1996,under their own LYT record label.

By 1995, Stephen had now moved to Hanover,but the boys got together for a last tour in Holland.
Davey then went on to form a new band “Dub Skelper” with Micheal Woods, continuing on the scottish folk note and throwing in their own style Dub-Reggae licks.
In 1993,the brothers got back together again to form yet another Feartie band “Junkmans Choir” continuing as ever in the Shanty style of play.
Stephen now records and performs under the name of “Mr Luggs” on the Topplers record label,ran by Alan Feartie hammering out even more Lugton-Looniness.

A great wee band from the wee parts of south west scotland,Nyah Fearties are to be noted down as long time Classics by many.to world of dying pop culture and a Scotland stripped of musical pride,the fearties kikked back a great DIY ethic to the whole thing.

Well worth a listen to if you arent familiar with the band already.
Tracks;
Radiation reigns
Stephens Rant
M.O.R
Release